Gaston Naessens, a biologist born in France but a Canadian citizen since 1975, is the founding father of 714X. He has been working in hematology since 1945 when he finished his studies specialized in Physics, Chemistry and Biology (PCB). For over 66 years, this researcher, who discovered the SOMATID and its cycle in the 1950s, continues to study the role played by this particle in the maintenance of our natural defenses including the immune functions. The somatid, which according to him, is the smallest unit of life, was discovered in fresh blood after numerous and repeated systematic tests where he could establish its evolutionary forms in a 16 phase pleomorphic cycle.

Here is a diagram of the Somatidian cycle as observed under a microscope by Gaston Naessens: 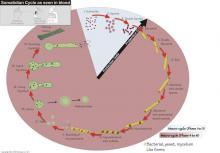 The discovery of the somatid and knowing the existence of its life cycle would have been sufficient to satisfy the intellectual curiosity of a researcher working in fundamental research. However, for Gaston Naessens, there was a step further to take. Knowing that a microscopic observation of blood could reveal the state of one’s immune defenses was not sufficient. Knowing that the disease was inevitable and nothing was done to prevent it did not correspond to his code of ethics. This extra step was thus the search for natural ways that could restore the functions of our defense system without causing any harm to all the blood’s elements. This work, which began in the 1950s, continues today and is embodied in the design of many health products intended to act on the Somatidian cycle . It was in the 1970s, following several experiences with other health products he had made available to the European public in the 1950s and 1960s,  that he created a new product: 714 X . (non-toxicity confirmed in 1978).

714X is a non-toxic natural health product capable of restoring the biological terrain when the immune defense function is too weak or too active.

Despite the obstacles and resistance to his new ideas, Gaston Naessens continues to move forward, and his perseverance has earned him at least the satisfaction of collaborating, as an independent researcher, towards the emergence of a new paradigm in health and to offer humanity effective and  non toxic health products.