Order now
714X is the invented name of Triméthylaminohydroxybicycloheptane chloride. 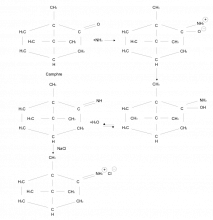 714X is an isotonic solution at physiological pH (7) containing nitrogen as the main active ingredient, camphor as a vehicle, or a nitrogenated derivative of camphor, at a level of 0.09 mg/ml (complying with the pharmaceutical industry’s norms of injectable solutions), mineral salts, and 18 different trace elements (metallic elements), measured in parts per million, and magnesium at a level of 6.5 ppm. these trace elements, even in trace amounts, do have a biological significance.

The level of sodium chloride (NaCl) is estimated at 8.2g/litre.

A plasma emission spectrometry study identifies the 18 following elements measured by the following parts per million):

The absence of proteins and immunoglobulins shows that this is not an immune serum prepared after injection to animals. 714X is not a vaccine. There is no risk of allergies or anaphylactic shock.

The presence of sodium chloride at a level of 8.2 g / liter shows that this is an isotonic solution with a pH of 7 (physiological solution). This solution complies with norms for injectable solutions of the pharmaceutical industry.
A mass spectrometry coupled with a chromatography reveals the presence of camphor or trimethyl-1.7.7 bicyclo (2.2.1.) heptanone-2 whose concentration we measured as 0.09 mg / ml (90 ppm). A nitrogenated compound and hydrochloric acid were also identified.
The comparative study using camphoroxime shows that this molecule does not exist as such in the analyzed sample of 714X. The precise nature of the nitrogenated compound contained in 714X could not be clearly identified.
Eighteen metals (metallic elements) were measured. They were all found at trace levels (parts per million) and considered to be of no biological significance, except for magnesium which at 6.5 ppm was too low to be given a therapeutic property. (This is the opinion of the private laboratory. However, the manufacturer claims that these trace elements, even in trace amounts, do have a biological significance)

Summary of the chemical analysis

Ultimately, 714X is an isotonic solution at physiological pH (7) containing camphor or a nitrogenated derivative of camphor, at a level of 0.09 mg/ml, complying with the pharmaceutical industry’s norms of injectable solutions.

Based on the foregoing data, the sponsor suggests that 714X contains at least one component which acts as a substance that promotes the induction of cytokine in vitro and has the following characteristics: The results clearly demonstrate that 714X is a strong activator of monocytes and / or macrophages and induces the secretion of proinflammatory cytokines including tumor necrosis factor (TNF-α) and interleukins IL-1β, IL-6 and IL-8. Monocytes / macrophages play a key role in immune defense. Macrophages represent a major recognition system for foreign cells, including tumor cells, and an important source of cytokines with immuno-modulatory properties and antitumor activities (including proinflammatory cytokines

TNF-α, IL-1β, IL-6 and IL-8). These data provide scientific evidence to 714X’s immunomodulatory role.
It is believed that the 714X enhances the immune response and plays a role in the removal of the tumor cell. The results appear to support this theory by suggesting that induction of proinflammatory cytokines represent at least one mechanism responsible for anti-tumor activity in vivo of 714X.