714X is a unique product due to its mode of intromission. In addition to this, 714X normalizes the biological terrain using the lymphatic circulation as a gateway into the body.

The particular choice for the mode of intromission of the product is based on the belief of its designer, who is convinced that the lymphatic system is the main highway system, one that facilitates the elimination of metabolic toxins circulating in the blood and that brings to the cells essential elements for their optimal functioning. 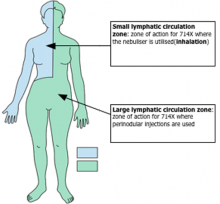 To access the large lymphatic circulation which drains 75% of the body surface, the mode of intromission is the perinodularl injection (around the lymph nodes) in the right inguinal region (the groin).

Basic treatment with 714X requires a box containing two vials of 6.5 ml of product. This quantity allows 21 days of injections to constitute a cycle.

To access the small lymphatic circulation, the preferred method is the introduction of the product by inhalation with the use of an ultrasonic nebulizer that allows the absorption of the product via the small glands that line the respiratory tract (714X divided into particles smaller than 5 microns).

714X's secondary treatment (the nebuliser method) must be performed in addition to the perinodular injection. It requires 3 boxes of 7 ampoules of 2 ml for 21 days of treatment which constitute 1 cycle.

Self-injection, even when one has already decided to use 714X is an unfamiliar process. The word injection itself raises some apprehension.

At the beginning of the treatment, it is completely understandable to be hesitant and to worry about self-injecting in the right area.

The location of the injection site is the first and most critical step.

714X users’ feedback allow us to say that the injection technique, when properly mastered the first 5 days, can be considered an enjoyable daily activity which can be incorporated in your daily schedule as a relaxing time. This activity then becomes a simple daily gesture which can be paired with listening to pleasant music in a relaxing and comfortable setting.

For adults, the injection site is located on this imaginary line, 3 to 5 cms (1,5 to 2 inches) above the femoral artery pulse.

For children weighing less than 30 kg (66 pounds), the injection site is located on this imaginary line, 1 to 2.5 cms (0.5 to 1 inch) above the femoral artery pulse.

By putting pressure on the femoral artery where the pulse is felt, the three deep lymph nodes are brought up to the surface. The product injected into the periphery of these deep lymph nodes will be absorbed by one of these nodes, hence the term: perinodular injection. The optimal injection zone has a surface area comparable to a small disc measuring 2 cm. Day after day, the needle does not have to be inserted in exactly the same spot, but in the same area, leaving some room for maneuver.

Diagram of the injection site

Please refer to the